‘Extremely rare’: A first edition of Alice’s Adventures in Wonderland

‘This is a true first edition of Alice’s Adventures in Wonderland,’ says Francis Wahlgren, Christie’s International Director of Science & Books, of an original 1865 edition of the Lewis Carroll fantasy that went on to become one of the most famous works in children’s literature. It will be offered in a stand-alone sale taking place at 12pm on 16 June, immediately following the Books & Manuscripts auction at Christie’s New York.

A lecturer in mathematics at Oxford, Carroll’s real passion was for storytelling, says Wahlgren. ‘This copy (estimate: $2,000,000-3,000,000) is interesting because we can trace its history back to the Oxford days,’ he notes. ‘It was given to a little girl by her father, who had a position at Oxford, and it stayed with her for her entire life.’

The story of the 1865 edition begins on 4 July 1862 when Charles Dodgson (alias Lewis Carroll), along with a friend The Rev Robinson Duckworth, took the three daughters of Dean Liddell of Christ Church, Oxford — Lorina, Alice and Edith — on a boat trip on the Thames. During the afternoon he related the first parts of Alice’s Adventures Under Ground, the precursor to Alice’s Adventures in Wonderland. On their return, Alice asked him to write down the story.

Working with renowned illustrator John Tenniel of Punch magazine, Lewis Carroll developed the elements of the story into this book. Three years later, during June 1865, the first edition was printed with the intention to have Macmillan & Co. of London publish it on 4 July 1865. Lewis Carroll requested 50 advance copies to give away. A few days later Carroll heard from Tenniel that he was ‘entirely dissatisfied with the printing of the pictures.’ Carroll withdrew the entire edition of 2000 and asked for the advance copies he had sent to be returned. 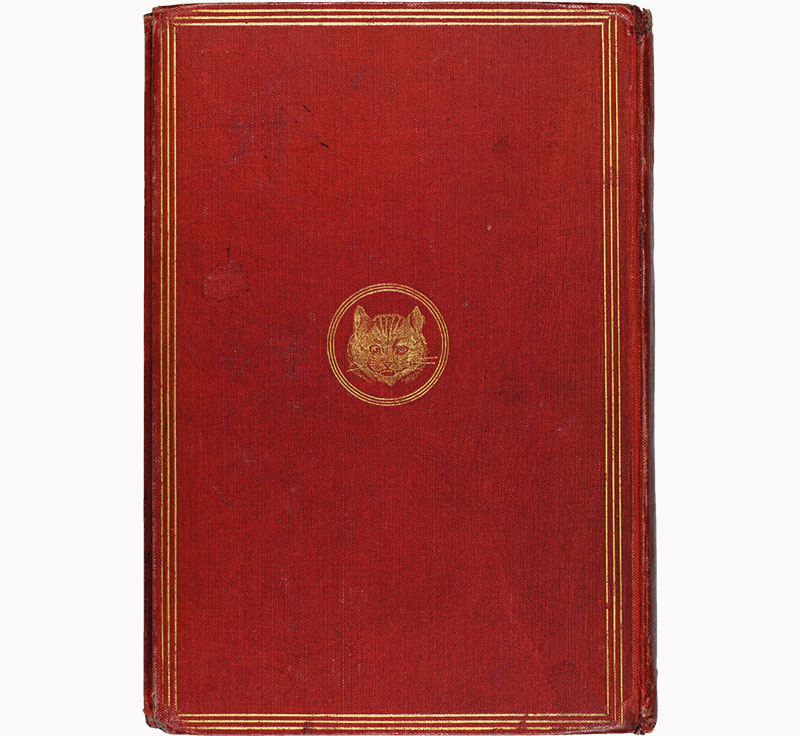 ‘Seeing an 1865 Alice is a very special thing,’ Wahlgren continues. ‘There are only 23 surviving copies, of which all but five are in public institutions.’ This edition has remained remarkably intact over the intervening 150 years since its publication, and still features its original binding, binder’s ticket and title page. ‘It has the original integrity which any collector really values,’ Wahlgren adds. It is one of ten surviving copies still in original red cloth, only two of which are in private hands, the other described as ‘heavily worn’.

This copy was given by Lewis Carroll to George William Kitchin, a colleague of Carroll’s at Christ Church, and Secretary of the School Book Committee for the University Press. Kitchin later gave the book to his daughter Alexandra (‘Xie’) Rhoda Kitchin (born 1864), who was one of Carroll’s favourite photographic models. The book is accompanied by an original photograph of her taken by Lewis Carroll. She sold the copy at auction in 1925, but, sadly, died on the day of the sale.

‘This book is extremely rare,’ says Wahlgren, ‘and really epitomises why I do my job and why I’m here at Christie’s.’