Every day, 22 veterans take their own lives. That’s a suicide every 65 minutes. As shocking as the number is, it may actually be higher.

The figure, released by the Department of Veterans Affairs in February, is based on the agency’s own data and numbers reported by 21 states from 1999 through 2011. Those states represent about 40% of the U.S. population. The other states, including the two largest (California and Texas) and the fifth-largest (Illinois), did not make data available.

People like Levi Derby, who hanged himself in his grandfather’s garage in Illinois on April 5, 2007. He was haunted, says his mother, Judy Caspar, by an Afghan child’s death. He had handed the girl a bottle of water, and when she came forward to take it, she stepped on a land mine.

When Derby returned home, he locked himself in a motel room for days. Caspar saw a vacant stare in her son’s eyes. A while later, Derby was called up for a tour of Iraq. He didn’t want to kill again. He went AWOL and finally agreed to a dishonorable discharge.

Derby was not in the VA system, and Illinois did not send in data on veteran suicides to the VA.

Experts have no doubt that people are being missed in the national counting of veteran suicides. Luana Ritch, the veterans and military families coordinator in Nevada, helped publish an extensive report on that state’s veteran suicides.

Part of the problem, she says, is that there is no uniform reporting system for deaths in America. It’s usually up to a funeral director or a coroner to enter veteran status and suicide on a death certificate. Veteran status is a single question on the death report, and there is no verification of it from the Defense Department or the VA.

“Birth and death certificates are only as good as the information that is entered,” Ritch says. “There is underreporting. How much, I don’t know.”

A homeless person who has no one who can vouch that he or she is a veteran, or others whose families don’t want to divulge a suicide because of the stigma associated with mental illness; they may pressure a state coroner to not list the death as suicide

If a veteran intentionally crashes a car or dies of a drug overdose and leaves no note, that death may not be counted as suicide. 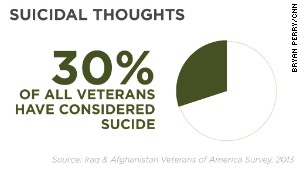 An investigation by the Austin American-Statesman newspaper last year revealed an alarmingly high percentage of veterans who died in this manner in Texas, a state that did not send in data for the VA report.

“It’s very hard to capture that information,” says Barbara van Dahlen, a psychologist who founded Give an Hour, a nonprofit group that pairs volunteer mental-health professionals with combat veterans.

Nikkolas Lookabill had been home about four months from Iraq when he was shot to death by police in Vancouver, Washington, in September 2010. The prosecutor’s office said Lookabill told officers “he wanted them to shoot him.” The case is one of many considered “suicide by cop” and not counted in suicide data.

Carri Leigh Goodwin enlisted in the Marine Corps in 2007. She said she was raped by a fellow Marine at Camp Pendleton and eventually was forced out of the Corps with a personality disorder diagnosis. She did not tell her family that she was raped or that she had thought about suicide. She also did not tell them she was taking Zoloft, a drug prescribed for anxiety.

Her father, Gary Noling, noticed that Goodwin was drinking heavily when she returned home. Five days later, she went drinking with her sister, who left her intoxicated in a parked car. The Zoloft interacted with the alcohol, and she died in the back seat of the car. Her blood alcohol content was six times the legal limit.

Police charged her sister and a friend in Goodwin’s death for furnishing alcohol to an underaged woman: Goodwin was 20. Noling says his daughter intended to drink herself to death. Later, Noling went through Goodwin’s journals and learned about her rape and suicidal thoughts.

A recent analysis by News21, an investigative multimedia program for journalism students, found that the annual suicide rate among veterans is about 30 for every 100,000 of the population, compared with the civilian rate of 14 per 100,000. The analysis of records from 48 states found that the suicide rate for veterans increased an average of 2.6% a year from 2005 to 2011 — more than double the rate of increase for civilian suicide.

Nearly one in five suicides nationally is a veteran, even though veterans make up about 10% of the U.S. population, the News21 analysis found.

The authors of the VA study, Janet Kemp and Robert Bossarte, included many cautions about the interpretation of their data, though they stand by the reliability of their findings. Bossarte said there was a consistency in the samples that allowed them to comfortably project the national figure of 22.

The VA report itself acknowledged “significant limitations” of the available data and identified flaws in its report. “The ability of death certificates to fully capture female veterans was particularly low; only 67% of true female veterans were identified. Younger or unmarried veterans and those with lower levels of education were also more likely to be missed on the death certificate.”

“We think that all suicides are underreported. There is uncertainty in the check box,” says Steve Elkins, the state registrar in Minnesota, which has one of the best suicide data recording systems in the country.