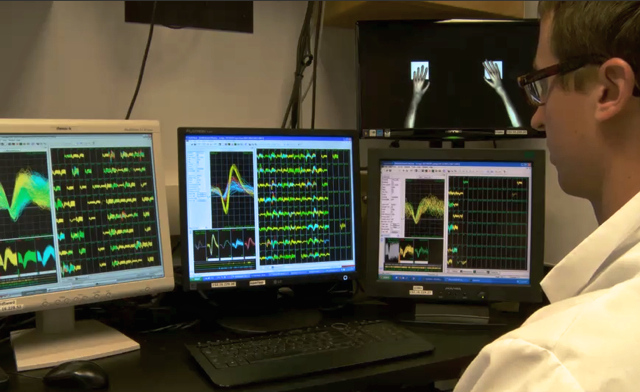 In February, Duke scientists announced a brain-machine interface that allowed a rhesus monkey to control a single robotic arm more than 7000 miles away. Today, they’veexpanded on the previous experiment, announcing an improved interface that allows for independent control of two arms, assimilating both mechanical arms into the monkeys’ existing motor control systems.

Similar to the previous experiments, the experiment set up two rhesus monkeys in front of a remote video link, while implants monitored nearly 500 neurons to pick up motion signals. After some training, the monkeys were trained to cover targets on the screen with the arms, proving the subjects had control over the remote robotic appendages. This latest experiment is only an incremental improvement over February’s trials, but it shows the basic brain-machine link holds steady through more complex setups that demand more and more of the brain. Scientists hope that future interfaces modeled on this one will someday help paralysis victims or amputees, although and human testing on the interface is still years in the future.

3D printing will give everyone the ability to manufacture anything, anywhere. It excels at producing complicated or specific parts or objects. This will lessen our reliance on shipping and traditional manufacturing while giving consumers greater creative control over the products they use. People are moving to cities in greater numbers than ever before, and for good reason. Research suggests hyper-dense cities may solve poverty, energy, health care, and education problems, leading to an improved quality of life for residents. It’s an exciting time to be a city dweller.

Like 3D printing, but with organic material. Eventually, scientists and engineers hope to deliver custom-made organs to those in need. Handheld devices could also repair damaged tissues at the scene of accidents or disasters. And researchers will have unlimited tissues for research, paving the road for even more discoveries.CLARITY is a powerful new method of mapping the brain in three dimensions. It will enable researchers to study neurological diseases and disorders in unprecedented detail. It will literally be like looking at age-old problems with new eyes. This is a huge step towards understanding Alzheimer’s, Parkinson’s, epilepsy, multiple sclerosis, and stroke recovery. Every item on this list depends on one thing: the energy to power it. The future of energy is murky, but one thing is clear. Whether wind, solar, hydrogen, or nuclear energy becomes the next big thing, renewable energy will help power the big ideas of tomorrow.

What if you could access your computer with your mind? No more typing, texting, or clicking. “Looking something up” would become “thinking about it.” Scientists just announced that they’ve successfully wired a monkey to control robotic arms from 7,000 miles away. Candy Crush via thought is next. CLARITY is a powerful new method of mapping the brain in three dimensions. It will enable researchers to study neurological diseases and disorders in unprecedented detail. It will literally be like looking at age-old problems with new eyes. This is a huge step towards understanding Alzheimer’s, Parkinson’s, epilepsy, multiple sclerosis, and stroke recovery.